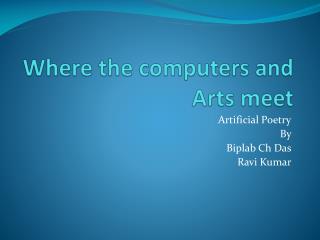 History of Computers - Our presentation about

Beyond Marketing: Customer Relationship Management (CRM) - . thursday 11:30am – 12:45pm one state: together in the arts

Chapter 1: Introduction to the World of Computers - . deborah morley. overview. this chapter covers: what computers are,

Chapter 3 Data Representation - . data and computers. computers are multimedia devices, dealing with many categories of