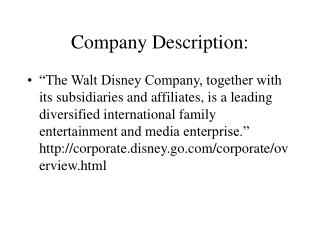 Company Description:. “The Walt Disney Company, together with its subsidiaries and affiliates, is a leading diversified international family entertainment and media enterprise.” http://corporate.disney.go.com/corporate/overview.html. Disney’s Vision and Mission. Company Overview - App profile template complete and send to amy_ball@intuit.com before your marketing review [your app

Company profile - . profile. a destination management company, phoenix voyages group was created in 1999 and is locally

Company profile - . analko began its course in the aluminum sector in 1974 from a small rented space in the haidari area,

General Description of Arthrology 关节学总论 - . the connections or junctions between bones are called joints or