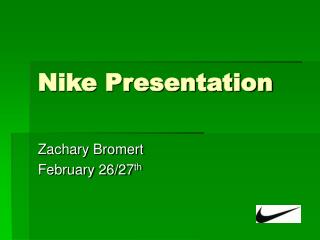 nike - . by, nk. nike. she was the winged goddess or spirit of victory young fit women with wings, swift flyer, fast

NIKE - . mission statement: to bring inspiration and innovation to every athlete* in the world . *“ if you have a body,

Nike - . please open your interactive notebook to cnn student news. 5 facts answer this question: what do you know about

Nike - . just do it. before there was nike. 1948-bill bowerman is hired as university of oregon’s track coach

NIKE - . today is a big day for the us government. do you know why? homework in the folder. how did u.s. markets respond

NIKE - . history of nike. logo of nike. nike is the goddess of victory, the ancient greek « Νίκη της

NIKE - Griffin powers . nike . nike. nike is a sportswear store nike was made in 1966 commercial. persuasion to buy nike