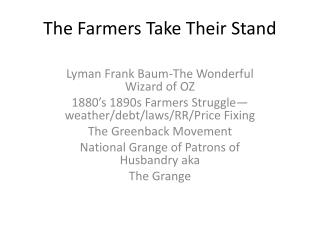 The Farmers Take Their Stand

The Farmers Take Their Stand

Taking Hybrid Pigeonpea to the Doorsteps of Farmers - . supported by national food security mission of india.

THE POPULIST MOVEMENT - . the plight of the farmers 1870s-1880s. farmers were becoming a minority in the usa. the numbers

Stand by Me! - . all things access for students with significant cognitive disabilities (swscd). presenters:. robin

Welcome to an Introduction to Writing Argument - . take a stand. would you rather have the voice of gilbert godffried or

Scarecrows - . the history of scarecrows. hungry birds have always been a problem for farmers.  sometimes the birds ate

Populist Movement - . farmers who ban together in order to deal w/problems. ?? debt- wanted gov’t to use silver backed

Farmers and the Populist Movement - . chapter 5 / section 3. farmers unite to address common problems. in the late

…a new beginning - . poverty eradication through community managed sustainable agriculture a way out of serious crisis

Cartoon Analysis For each of the four cartoons: - 1. what are the important symbols or characters in the cartoon –