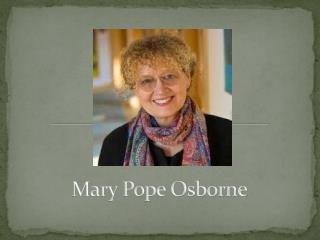 Mary Pope Osborne. Childhood Facts. Born in Fort Mill, Oklahoma on May 20, 1949 Before she was 15, she lived in Oklahoma, Austria, Florida, Virginia and North Carolina. Dad retired to a small town in North Carolina.

All About Mary Pope Osborne - “i’m one of those very lucky people who absolutely loves what they do for a living.

Midnight on the Moon By Mary Pope Osborne - . there are many planets in space.

Snakes and Other Reptiles By: Mary Pope Osborne &amp; Natalie Pope Boyce - . a snake skeleton. a bird like dinosaur:

Thanksgiving on Thursday by Mary Pope Osborne Chapter Questions - . chapters one and two. chapter one. why did jack and

Clue 1: It is fantasy. Clue2: The author is Mary Pope Osborne. - Name that book! by chihyun press “enter” or click

John Osborne - . “the man who turned anger into art”. john osborne changed the face of british theatre. his play