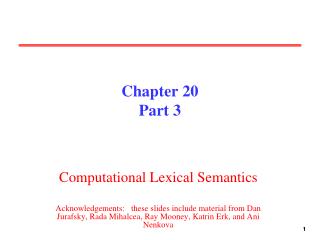 Chapter 20 Stocks and Sauces - . intro to culinary arts mrs. muniz. stocks french for base. form the foundation for

Chapter 20 Part II – Ablatives of Place from Which and Separation - . ch. 20 pt. ii – ablative of place from which

Chapter 20 - . sex, marriage and family. chapter preview. what is marriage? what is family? what is the difference

Chapter 20: The Parts of a Sentence - . sentence: a group of words that contains a subject and a verb and expresses a

Chapter 20 - . long-term debt, preferred stock, and common stock. after studying chapter 20, you should be able to:.