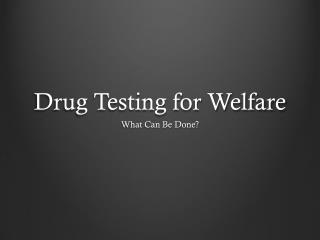 Drug Testing for Welfare. What Can Be Done?. Whats Welfare?. Welfare: (noun)- Aid in the form of money or necessities for those in need.

Drug of Abuse Testing Market forecasts to 2020 - Explore detailed toc and scope of the report:

Urine Drug Testing - . why we do it when we do it how we do it what do we test for problems &amp; limitations. why

What’s Ahead for Federal Drug Testing Programs - . drug testing advisory board (dtab) initiatives in 2013 presented by:

What’s In Your Urine? - . by: traci mcconnell. welfare. government aid intended for short term usage may include cash,

Drug Testing for Welfare - . by jessica carter. i. thesis statement/ introduction. should welfare applicants be drug

What’s New and What’s Next in the Treatment of MDS? - . mikkael a. sekeres, md, ms professor of medicine director,