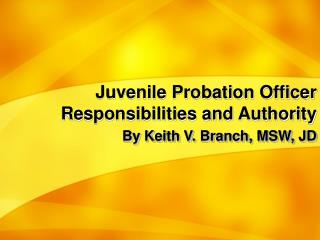 Probation: The Pre-Sentence Report - . probation organization. 58 counties in california- each has a probation

CJP Form - . cjp questions. census of every juvenile on probation in the united states on oct. 21, 2009: age sex race

Juvenile Law - . ch. 17 - civics. what is a juvenile?. a juvenile is any person who is not an adult in pa, juveniles are