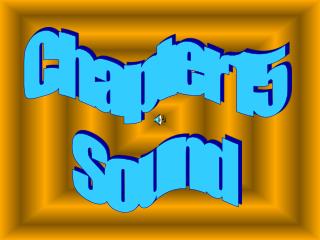 Chapter 15 Sound. 15.1 Properties of Sound. The production of sound Waves always begin with A vibrating object. This vibration causes the Molecules around it (usually Air molecules) to move. This movement is a wave pattern. Compression is the region of a Longitudinal wave in which the Chapter 15: Sound - Chapter 15: sound. click the mouse or press the spacebar to continue. in this chapter you will:.

Chapter 15 Sound - . what is sound? a pressure disturbance mechanical longitudinal wave moves away from the source with

Chapter 15 Sound - . if a tree falls in the forest and no one is there to hear it, does it make a sound ?. a sound wave

Chapter 15 Sound - . quiz 15. chapter 15 sound. demonstrate knowledge of the nature of sound waves and the properties

Chapter 15: Sound &amp; Light - . section 1 – sound. sound carries information about the world to us. many animals

Chapter 15 Recording and Editing Sound - Getting started in this chapter, you will learn: how sound capability enhances

Chapter 20 Sound - . the physicist usually takes the objective position and defines sound as a form of energy that

Chapter 26: Sound - . the origin of sound. all sounds are produced by the vibrations of material objects pitch – our