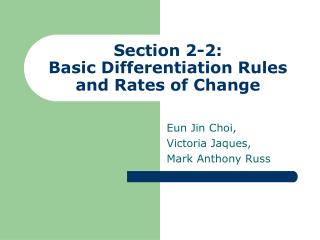 Computer Hardware: A Quick Overview - . in this section of notes you will learn about what are the basic parts of a

ESSENTIAL CALCULUS CH02 Derivatives - . in this chapter:. 2.1 derivatives and rates of change 2.2 the derivative as a

Patterns of Heredity and Human Genetics - . a look at genetic complexities. chapter 12 notes. what happens when heredity

Section 3: Introduction to Basic Counseling Skills - . training objectives (1). at the end of this workshop you will be