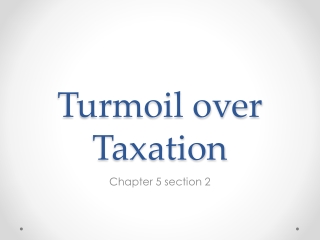 Turmoil over Taxation. Chapter 5 section 2. Bell Ringer!. Why did the British government see the need to begin taxing the colonies? What was the main reason why colonists resisted these taxes? What other issues did they have with the British in America?. Britain Imposes New Taxes.

Chapter 1 - . an introduction to taxation and understanding the federal tax law. 1. the big picture (slide 1 of 5).

Chapter 11-Part A Income Taxation of Individuals. Deductions For AGI Itemized Deductions Fall, 2007 - . in 2007, mr. and