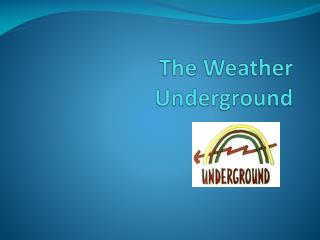 The Weather - . atmospheric movement in weather change. weather. the short-term (a few hours or days) condition of the

Sometimes You Need a Weatherman to Tell You Which Way the Wind Blows - The weather underground experience, 1991 - 2013.

THE WEATHER - . 5 cold-weather health hazards, and how to stay safe. 1. what is

The Weather Underground - . by andrew farrell and tate hollander. mission of the weatherman. to form a clandestine

What’s The Weather Vocabulary - . on the same day in march clouds, rain, snow, and ice a good day for kites. weather.

What to include : a greeting and a closing what is the weather like how do you like it - What are you doing ( activities

What does the weather mean to farmers? - . l.o. know which important weather conditions a farmer must keep track of.

The Weathermen - . who were the weathermen?. weathermen, and later the weather underground, was an american radical left

Weather and Climate - . by: brianna shields november 15, 2005. do now. listen to this podcast:. what is the difference