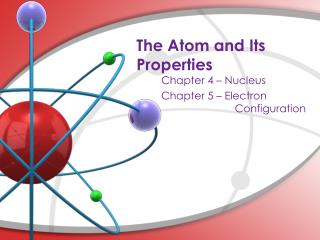 The Atom and Its Properties. Chapter 4 – Nucleus Chapter 5 – Electron Configuration. Chapter 4 Objectives. Describe an atom’s structure and differentiate among the particles that make it up. Properties of Synapse - . dr ghulam mustafa. learning objective’s. discuss the properties of synapse or describe the

Chapter 4: Atoms - . the building blocks of matter. an atom is the smallest particle of an element that retains the

AP Chemistry Chapter 3 The Structure of the Atom - . beginning of the atomic model. democritus was the early (around

Chapter 7 - . atoms, elements, compounds and mixtures. 7.1 structure of an atom. objectives: summarize how models of the

Electricity and Magnetism - . review from chem. matter is made up of atoms, what are the parts of the atom? which parts

Quantum Mechanical Model of the Atom - . many scientists contributed to the development of the quantum mechanical model

Atoms and Elements:The Nature of Matter - . “it’s easier to break an atom than a prejudice” a. einstein. chemists