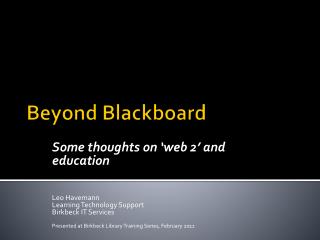 Some thoughts on ‘web 2’ and education Leo Havemann Learning Technology Support Birkbeck IT Services Presented at Birkbeck Library Training Series, February 2011. Beyond Blackboard. Framing questions, defining terms. In this presentation I will try to answer the question : Blackboard - . url: http://blackboard.hcde.org. your username and password will be emailed to you. the student’s user

Are You Brighter than a 15 th grader? - . part i. instructions. this is team work! question displayed and read discuss

Effective use of Blackboard Stuart Young - Lecturer in internet and web development. all course taught in class and

Plan of talk - Use of the blackboard online learning environment for collaborative, self-directed projects david dymock

13 Ways of Looking at (a) Blackboard