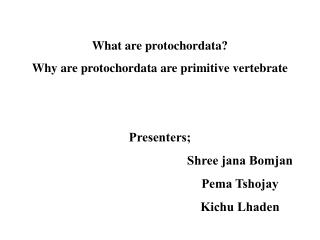 Vertebrate Zoology - . dr. a. kristopher lappin is attending the meeting of the society for comparative and integrative

Vertebrate Groups - . vertebrata. more complex animals most have a backbone made up of individual bones called vertebrae

Table of Contents - . what is a vertebrate? fishes amphibians reptiles vertebrate history in rocks. - what is a

PEMA ICHM 2 - . chapter 1 and 2. we will talk about. the major trends today new ways of working a new workforce wanted :

Hotels and Resorts - Shree vilas orchid is one of the best hotel and resort in udaipur. it is located in the city of lake