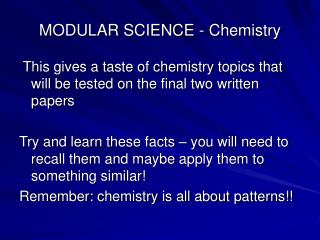 MODULAR SCIENCE - Chemistry. This gives a taste of chemistry topics that will be tested on the final two written papers Try and learn these facts – you will need to recall them and maybe apply them to something similar! Remember: chemistry is all about patterns!!. Paper 1 - chemistry. Science Modular exams - . you have completed 6 modular exams these are worth 75% of your year 10 core science gcse (you

Science and chemistry - . what is chemistry?. the study of the composition of matter and the changes it undergoes comes

Modular Approach in Teaching Science 10 - Modular approach in teaching has been a buzzword in our educational system.

Chemistry in Earth Science - . chapter 2.1. rocks, minerals, and elements. why do we care about chemistry in earth

Chemistry is a “science” - . a science is a body of organized knowledge that is continuously updated through inquiry

Chemistry is a “science” - . a science is a body of organized knowledge that is continuously updated through inquiry

The Science of Chemistry - . chapter 1, part b. i. what is chemistry?. deals with the properties of matter physical

Access to Science: Chemistry - Have a go at the element word search, use your periodic tables to help you!. access to

Chemistry: The Central Science - Matter: anything occupying space and having mass. . mass vs. weight. mass, measured in

The Science of Chemistry - . before chemistry there was…. alchemy. alchemy : a medieval science and philosophy aiming

The Science of Chemistry - . chapter 1 chemistry i 5.0. alchemy. how do you picture a chemist?. what is chemistry? .

Science Chemistry for Kids - Chemistry is one of the toughest subjects for school going kids. but not anymore because