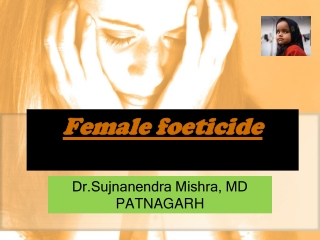 Some of the worst gender ratios, indicating gross violation of women’s rights, are found in South and East Asian countries such as India and China. The determination of the sex of the foetus by ultrasound scanning, amniocentesis, and in vitro fertilization has aggravated this situation. No moral or ethical principle supports such a procedure for gender identification. The situation is further worsened by a lack of awareness of women’s rights and by the indifferent attitude of governments and medical professionals. REPRODUCTIVE SYSTEM FEMALE - . the organs of the female reproductive system enable pregnancy to occur with the first

Female Reproductive System - . care for injuries of the female genitalia (1 of 2). female internal genitalia is well