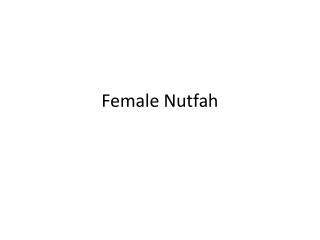 سورة الفاتحة - Under the shade of. surah al- fatihah. سورة الفاتحة. 'shall i not teach you the

OOGENESIS - . maturation of oocytes begins before birth once primordial germ cells have arrived in the gonad of a genetic

REPRODUCTION IN HUMANS SPERMATOGENESIS, OOGENESIS, CONCEPTION, IMPLANTATION,&amp; INTRODUCTION TO IVF - In the name

Nutfah - . nutfah is a comprehensive term and includes male and female gametes, zygote, morula , and blastocyst before

Female foeticide - Some of the worst gender ratios, indicating gross violation of women’s rights, are found in south