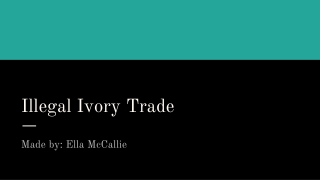 Illegal Ivory Trade. Made by: Ella McCallie. Why am I researching illegal ivory trade?. I LOVE elephants! African elephants are being harmed. They are being killed for their beautiful ivory tusks even though we have already made it illegal. Elephants need their tusks. We do NOT!