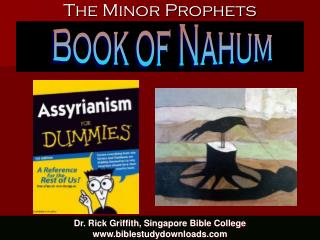 Old Testament Survey: The Book of Nahum - . nation reaps what it sows. “the lord is good, a stronghold in the day of

Nahum - . “consolation”. introduction. although a contemporary of zephaniah, habakkuk, and jeremiah nahum is not

Nahum - Introduction. although a contemporary of zephaniah, habakkuk, and jeremiahnahum is not addressed primarily to

Nahum: A Message of God’s Judgment - . jan. 6. i wonder … . if you suddenly had to flee your flooded home, what

The Grace and Justice of God- Nahum - . expository series on the book of nahum part 1/4. the old testament overview. 2165

Archaeomusicology and the Study of Jonah and Nahum - . iconea—international conference of near eastern