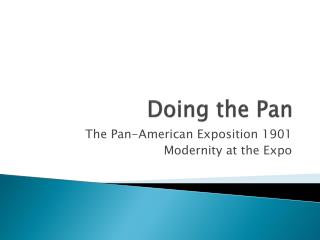 Doing the Pan. The Pan-American Exposition 1901 Modernity at the Expo. Why an Expo?. In the early 1900s they didn’t have the internet, television, cell phones, and the same amount of media we do today. How do you think they stayed in touch with what was popular? Expositions of course!!.