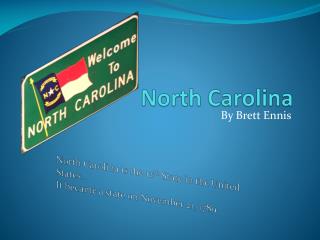 North Carolina - . by cody smith. north carolina is a state of the united states . the capital is raleigh. . license

North Carolina - Is in the south. and 5 presidents lived their. also it has many cities. it was a in november 21

North Carolina - By: mark krysiak. state bird- cardinal. surfing is a big part of nc. home of the carolina hurricanes.

North Carolina - Plan your trip: choose your destination and then reserve your room at one of the beautiful sites listed