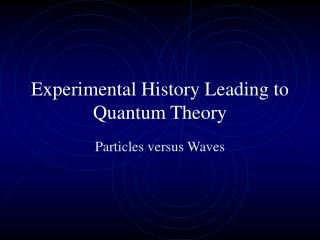 Experimental History Leading to Quantum Theory. Particles versus Waves. Properties of Light ~1650. Travels in straight lines in a given material Casts sharp shadows Comes in colors Reflects from smooth surfaces Refracts when traveling from one material to another Planck's quantum theory is compatible with the experimental data related to which of the following? - . blackbody

Quantum Numbers - . rules of electron location and orbital filling order. if the arrangement of the electron is known, a

Quantum Dots - . what is a quantum dot?. in two words, a semiconductor nanocrystal. easily tunable by changing the size

WHAT IS COMPARATIVE PUBLIC ADMINISTRATION ? - . quotes of the day . “ without theory, good planning is simply a random

Quantum Mechanics and the Higgs Boson - . a history of modern physics from 1901 to next week. . computer generated

Quantum Numbers - . rules of electron location and orbital filling order . quantum numbers at the conclusion of our time