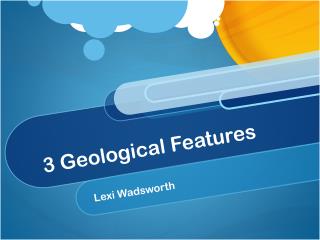 How do geologic processes change the shape of Earth’s surface? - . what do earth’s layers consist of?. crust mantle

THE GEOLOGIC TIME SCALE: THE HISTORY OF EARTH - . geologic time scale. look at this time scale. tell me 5 things about

Geological Features - . kaleb haase. mountains. this is formed when tectonic plate move into each other and start to rise

Our class notes of the Geological Features of the Earth - . beach- an area of land covered in sand next to water.

3. GEOLOGIC TIME - . john playfair stares into the abyss of time at siccar point, scotland. age of the earth – 4004 bc.

Landforms - . definition: any feature of earth's surface having a distinct shape and origin. landforms include major

Windows 10: The Top Features! - Windows 10 with great gesture and get all set to use these new features; especially the