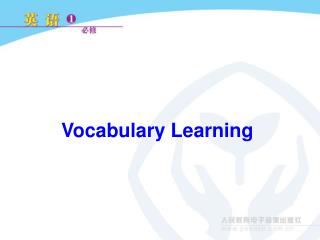 vocabulary learning - . nothing is nicer than getting away for an enjoyable holiday. a trip on “ the true north”.

Learning Vocabulary - . mindset and methods. mindset. vocabulary is power. power to understand and express yourself power

Learning Computer Parts and Vocabulary - Hi, i’m cotter. i will give you the tools to learn all about computers.