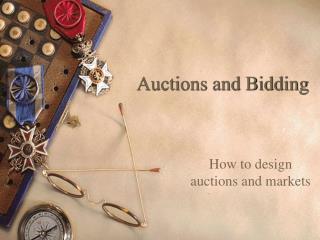 Auctions and Bidding. How to design auctions and markets. Lollie Auction. Jar contains a certain number of lollies Winner of auction will get 2 cents per lollie You are bidding for the money, not the lollies ! Playing for real money. Traditional Auction Experience. Wine Auctions.