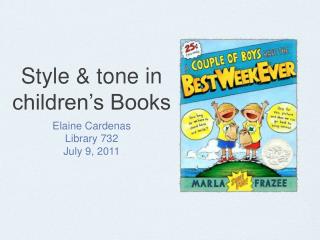 Style & tone in children’s Books. Elaine Cardenas Library 732 July 9, 2011. IMAGERY. All the Places to Love by Patricia Maclachlan Maclachlan describes beautifully everyone’s favorite spot on the farm. “My grandmother loved the river best of all the places to love. Analyzing Tone - . objectives. students will be able to identify complimentary tones and tonal shifts in a variety of

The Mission of Reach Out and Read: - ?when loving parents share books with them, children will develop an early positive

Reading to Children - . children who learn early in childhood that books are fun are more likely to remain readers

Children’s Literature - . by amy borders borders2946finalproject. children’s literature. there are many kinds of

Tone - . it’s all about attitude. i have a present for you!. are you… surprised? excited? very thankful?

Don’t Take That Tone With Me! - . tone: a guide to the literary element. tone sweet tone. tone: not this literary

Tone Activities and Tone Bingo - . fill-in your bingo card with tone vocabulary words. make sure you select words from

Chapter 4 Style and Tone--continued - . nine ways to make your writing easier to

Style and Tone - . style relates to an author’s use of vocabulary, level of diction, sentence structure, arrangement of

AR BOOKS - Room 8 picked out their first ar books! the children are allowed to have a total of 4 items checked out at a

Style, Tone, and Mood - . …to support the author’s purpose. what is style ?. every author has his or her own style

WRITE BITES - . early college campus. tone in literature tells us how the author thinks about his or her subject. the