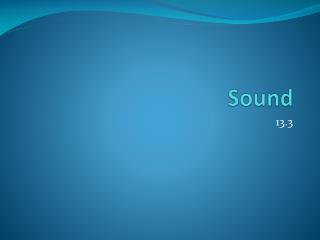 Sound. 13.3. Harmonics. A vibrating string will produce standing waves whose frequencies depend upon the length of the string. Harmonics Video 2:34. In the lowest frequency of vibration, one wavelength will equal twice the length of string and its called the fundamental frequency (f 1 ) . Sound - . the role of sound. sound rarely draws a great deal of attention from audience members even though it is crucial

Sound - . indicate source use words that imitate the sound break complicated sounds into parts describe the character of

SOUND - . sound is a form of energy that is created by vibrations passing through matter. click above for video clip.

Sound - . sound waves. the origin of any sound is a vibrating object usually the frequency of the sound is the same as

Sound - She was the only paying woman passenger on the flight of germany’s massive, twelve-engined dornier do-x flying

SOUND - . a different kind of wave. i. longitudinal waves. the wave’s motion and the disturbance are parallel to each

Sound - . now hear this!. what is sound?. sound is a form of energy. other types of energy we will learn about are heat

Sound - . sound is created by vibrations. as sound moves through air it vibrates the air particles. this is a

Sound - Some from heim chap 13. sound. you tube. learning outcomes. describe the basics of human hearing explain the

Sound - . today you will learn: how sounds are made and what they are. how we measure sounds how we can change sounds