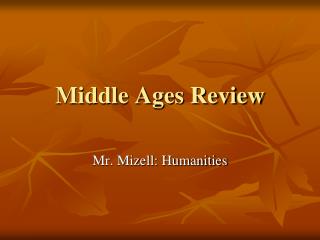 Middle Ages Review. Mr. Mizell: Humanities. Unit 2 Page. Title: Renaissance and Reformation AOI: Environments, Human Ingenuity Unit EQ: How did cultures, ideas, and power change during this time?. What do you know about the Middle Ages?.

Session 15 Polities of the Early Middle Ages A review The High Middle Ages Its features - . t h e a m e r i c a n u n i v

Islam in the middle ages - . instructions: based on the images you saw in the earlier powerpoint, complete the kwl chart

The High Middle Ages - . and the transition to the renaissance western civilization – january 11, 2013. section 4

European Middle Ages - . 500-1200 previewing themes. kwl. what do you know about the early middle ages? what do you want

Art and Architecture during the Middle Ages: Review - . the italian renaissance: review. plato and aristotle. ptolemy.