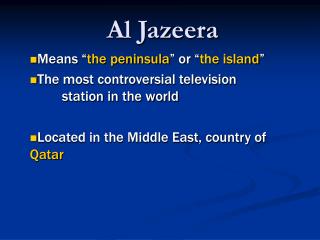 Al Jazeera. Means “ the peninsula ” or “ the island ” The most controversial television station in the world Located in the Middle East, country of Qatar. Welcome to Al Jazeera Childrens Channel - Corporation statement. visionto be the children's channels of choice for every

Al-Masjid Al-Haram - . masjid al-haram is a large mosque in the city of mecca, and the largest in islam. did you know