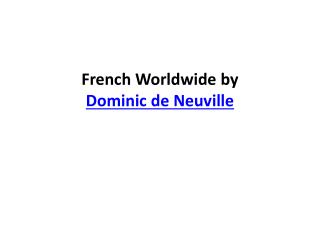 The official language in Egypt is literary Arabic, and it is mandatory in all schools. The most used second languages in Egypt are English and French, which are learned by some elements of the Egyptian upper and upper-middle classes; most Egyptians will mostly learn English and French in addition to Arabic. Dominic Bowkett - Before you go working for yourself, you should read pros & cons of online freelancing by dominic

OUR SOLAR SYSTEM by Dominic Fabbri - . our solar s ystem has two groups of planets, the inner planets and the outer

GENETIC ENGINEERING BY DOMINIC FLORES AND DAAWUUD MUHAMMAD - . genetic engineering is a laboratory technique used by

ST. DOMINIC SAVIO C.H.S. - Why are we here?. ease anxietygain insight and information on the college processget a jump on