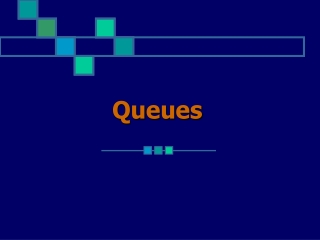 Queues - . cse, postech. queues. like a stack, special kind of linear list one end is called front other end is called

Active Queue Management - . fundamental problem: queues and tcp. queues queues are to absorb bursts of packets. they are

Queues - . iti 1121 n. el kadri. definitions. a queue is a linear abstract data type such that insertions are made at

Priority Queues and Heaps - . priority queues. we already know a ”standard” queue: elements can only be added to the