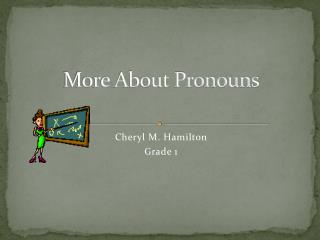 More About Pronouns. Cheryl M. Hamilton Grade 1. Pronoun. A pronoun is a word that takes the place of a noun or nouns. Remember. A noun is a person, place, or thing. You add an “s” to most nouns if you are talking about more than one. . Pronouns We Know. he she it we you they I me. all about pronouns - Pronouns must agree in number and gender with the nouns to which they refer.. a teacher must respect

MORE ABOUT - . christmas. christmas. beginning : 4th century take the place of pagan celebrations of the winter

A Few Things about Pronouns

More About Cache - . xmc – external memory controller . the xmc is responsible for the following: address

More about SQL - . more about select, nested selects group by, having, order by other joins aggregate functions views.

More About Syllogisms - . the quantifiers, causes, and validity of syllogisms. quantifiers. we have already learned about

More about equilibria - . predicting the position of acid-base equilibria. acidity, basicity and the periodic table lewis

More About Pollution - . done by: tin wei heng. what is pollution?. pollution is the presence or introduction of a

More About HTML - . tables and images. objectives. you will be able to create tables in html. include images in your html

More About Warehousing - 1. five tips to improve the efficiency of your warehouse. 2. top tips to find the best