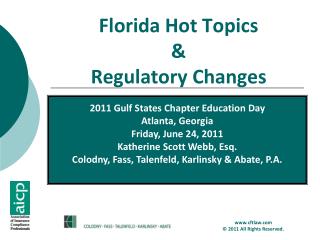 Regulatory Compliance - . food law fsc-421. what are we talking about?. judicial enforcement remedies available to the

The Quality of U.S. and Florida Math Instruction Compared with Singapore, a Recognized World Leader - . florida

iBudget Florida Stakeholders’ Meeting - . october 23, 2009. main question: how should we get information about people