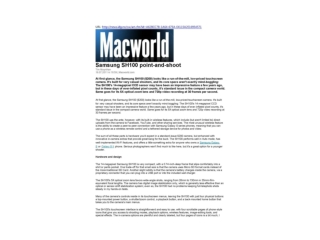 At first glance, the Samsung SH100 ($200) looks like a run-of-the-mill, low-priced touchscreen camera. It's built for very casual shooters, and its core specs aren't exactly mind-boggling: The SH100's 14-megapixel CCD sensor may have been an impressive feature a few years ago, but in these days of ever-inflated pixel counts, it's standard issue in the compact camera world. Same goes for its 5X optical zoom lens and 720p video recording at 30 frames per second. Samsung SH100 Hands-On Review - The slant body design has also been adopted for the sh100. when it comes to the previous

Samsung New Camera SH100 Unboxing and Review - Sh100 get out of the box the first time, was shooting by

Point, Click, and Shoot These 7 San Diego Spots - When you land in san diego, it won’t take long before you whip out

Digital Photography: Beyond Point &amp; Shoot Cameras - . a basic discussion for people who love to take photos, but

SHOOT - This is a new technology from sony. in fact, your computerscreen will become a digital camera. to take a picture

Shoot And Catch Ball - The shoot and catch ball game is very easy and fun to play with children’s. it is made of the

Which Camera To Buy – Point & Shoot, Bridge Or DSLR? - Looking for a camera but, you don’t know whether to buy a