Law Warm-up Which of the following is or was actually a written state law ? - PowerPoint PPT Presentation 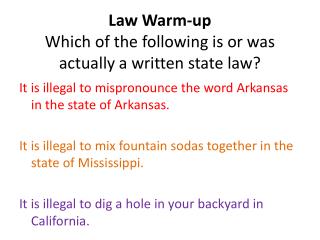 Law Warm-up Which of the following is or was actually a written state law ?

1 / 14
Download Presentation
Law Warm-up Which of the following is or was actually a written state law ?
67 Views

Law Warm-up Which of the following is or was actually a written state law ?

Warm-Up - . what does the motion of gas molecules look like? why does a balloon inflate when you blow it up? why will

Warm Up CJ - . what do you think life was like during the “old stone age?” do you think you could survive without any

Warm Up / Agenda - . who were the two leaders in the mali empire? what was mansa musa famous for?. sundiata took trade,

Warm-up - . answer the following question in your notebook after you write down the lesson name and objective: why and

Warm Up- 11/11/08 - . analyze the following cartoon and write down your interpretation of it’s meaning. agenda

Warm-up: Tuesday, March 11 - . in programming, what is the difference between an object and a class?. objects and

Warm-up - . be in your seat, quiet and working by the time the bell rings select a 3 rd color of highlighter and color in

Warm-up- Write and answer each question - . what does bicameral mean? name the 2 houses in congress. how many members are

Warm up 3-28 - . take out your judicial branch worksheet and pass it to the front. please take out a sheet of paper and

Homeroom - . drop everything and read!. warm-up. use the textbook to define each of the following words and use each word

Warm-up #5 - . how did the framers solve the issue of representation in the legislative (law-making) branch of the

WARM UP AND WARM DOWN - . a warm up starts with light exercise then stretching to: reduce the risk of injury prepare the