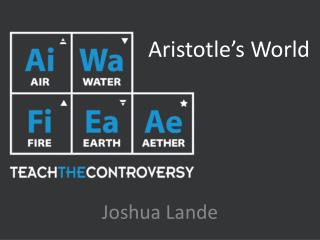 Aristotle’s World. Joshua Lande. Aristotle (384 BC – 322 BC). Born of a well-to-do family in the Macedonian In 384 BC. At 17 he went to Athens to study at Plato’s Academy. He remained for the next 20 years. Aristotle’s Physics. Is amazingly plausible, coherent, and common sense. Darwinism - . the origin of the species by natural selection. plato. believed there were two worlds a real world that is

Aristotle - . some facts about aristotle. lived from 384-322 plato’s best student at the academy father was a physician

Evolution of life? - . what is evolution?. what are the main ideas of the following scientists about the evolution of

Aristotle - . robert hoover a-4 4/29/13. background. student of plato and teacher of alexander the great. he was a greek