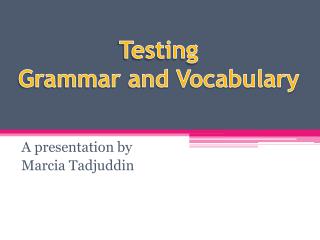 Grammar and Vocabulary - . read the sentences carefully and for each item choose the alternative that best fits the

Grammar Vocabulary - . clauses. a clause is a group of related words that has both a subject and a predicate. an

Grammar Vocabulary - . 20. fragment= a phrase or dependent clause wrongly used as a sentence in standard

TESTING SPEAKING AND VOCABULARY - . testing is not only getting marks but it is also used as a feedback. it gives