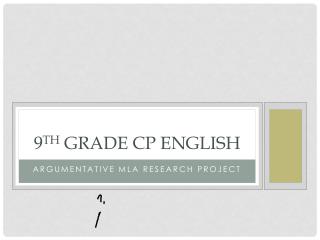 8 th Grade English - . …where dreams become reality!. we are here to explore,. to learn,. to dream,. and to create. we

9 TH GRADE ACADEMY - . in high schools across the country, over 60 percent of total discipline referrals are from 9th

Welcome to 9 th Grade English! - . mrs. carlson. a little about me:. ba in eng./secondary edu . from houghton college in

9 th Grade Health - . chapter 1 wellness and your choices mr. hrunka. what is health? what is wellness?. health- freedom

9 th Grade English - . final exam review. open-ended essay for the final. state a theme from one of the works listed

8 th grade English - . literature review. “all but my life”. gerda was able to survive her imprisonment by nazis by

Grade 9 English - . library and research orientation. what will we do today?. introduce you to the library staff show you