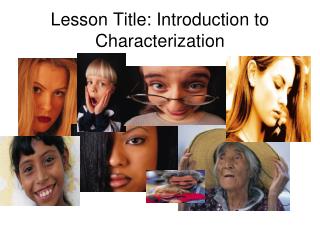 Lesson Title: Introduction to Characterization. Objectives. The student will be able to: Analyze the methods authors use to develop and reveal character. Determine character traits from indirect characterization. Introduction To Astronomy Lesson 1 - . stanford astronomical society 11/30/07. topics for this lesson. earth based

Lesson 2 Introduction to Amplifiers - . an example of application of amplifiers representation as a two-port network.

Lesson 3.1 Introduction to Energy - . what can the human body withstand? http ://

Lesson 3.10: Introduction to Sequences - . concept: recognizing sequences eq: how do we recognize and describe patterns?

Lesson 1: Introduction to Apologetics - . i. what is apologetics?. apologetics is the defense of the faith. christian

Lesson 8 Introduction to Statistics - . what statistics is. statistics is the branch of mathematics that examines ways to

Standard/Lesson title - . remember all questions refer back to your learning objective skill and concept. this template