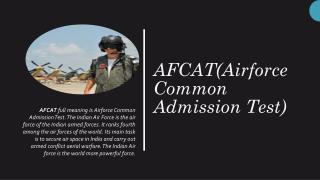 AFCAT full meaning is Airforce Common Admission Test. The Indian Air Force is the air force of the Indian armed forces. It ranks fourth among the air forces of the world. Its main task is to secure air space in India and carry out armed conflict aerial warfare. Afcat written coaching - How can you crack afcat written exam, you can help any reputed coaching center they will provide

AFCAT Syllabus - Whole afcat syllabus you will get in the

AFCAT Coaching in Delhi to Make You Able to Clear Entrance Exams Successfully - For students, who want to make their