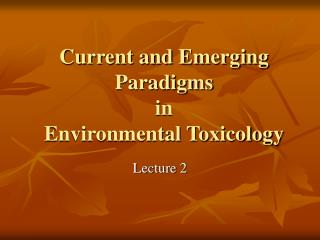 Toxicology - . what is toxicology ? the study of the effects of poisons. poisonous substances are produced by plants,

Nanotechnology, Health and The Environment

Toxicology - . human health. what determines whether a chemical is harmful?. size of dose over a certain period of time

Lesson 8: Environmental Health, Pollution, and Toxicology - . big question: why are even tiny amounts of pollutants a

Nanotechnology and Nanomaterials in Consumer Products: Regulatory Challenges and Necessary Amendments - . george a.