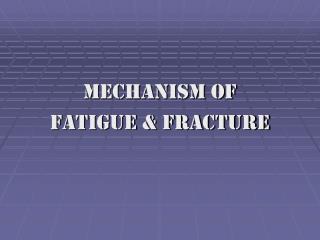 Principles of Fracture Treatment - . what is a (bony) fracture?. disruption of a bone’s normal structure or

Methods of Fracture Fixation - . what are the forces acting on a fracture after reduction and fixation? . shear

Chapter 6 Fatigue Failure Theories - . fatigue failure. occurs when stresses are changing throughout the life of a part.