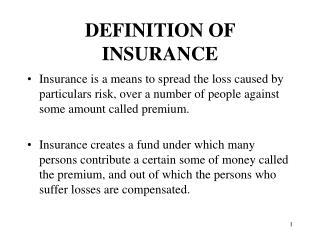 DEFINITION OF INSURANCE. Insurance is a means to spread the loss caused by particulars risk, over a number of people against some amount called premium.

Pricing Medical Insurance Individual and Group - . meeting-cum-seminar on preparedness towards de-tariffing in non-life

Demand and Supply of Health Insurance - . folland et al chap 8. outline. what is insurance? risk and insurance the demand

Demonstrate knowledge and insight into the Short Term Insurance Act (No 53 of 1998) and the accompanying Regulations.