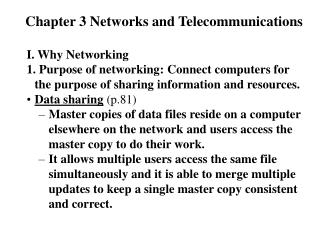 I. Why Networking 1. Purpose of networking: Connect computers for the purpose of sharing information and resources. Data sharing (p.81) Master copies of data files reside on a computer elsewhere on the network and users access the master copy to do their work.

Chapter 3: Network and Communication - . what is a network? what types of network are there? what networking standards