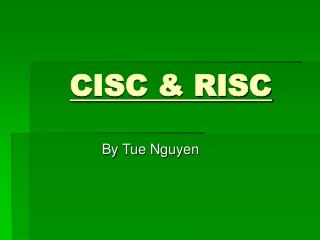 RISC vs. CISC - . by: frank norris. topics of discussion:. technological limitations which lead up to the design

CISC…AGAIN!!! (and a bit o’ RISC, too) - . by javier arboleda. agenda. brief history an example of “closing the

RISC and CISC - . risc versus cisc. the world of microprocessors and cpus can be divided into two parts: complex