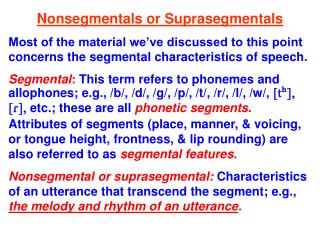 Nonsegmentals or Suprasegmentals Most of the material we’ve discussed to this point concerns the segmental characteristics of speech.

2.1 Tangents and Derivatives at a Point - . finding a tangent to the graph of a function. to find a tangent to an

Transport of Radioactive Material - Objectives. by the end of this module, the student will be able to:state the