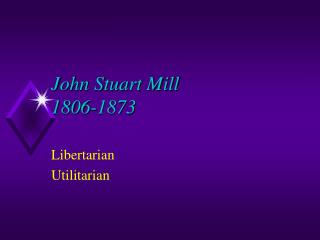 Not just a holiday! Get your outpatient sleep study done in a local hotel - . phyllis murphie, john samuels, jane gysin,

John Stuart Mill - . 1806-1873 son of james mill (both he and jeremy bentham stand as the theorists of utilitarianism)

John Stuart Mill - . on liberty. written in 1859. according to mill, why is freedom of speech and thought important?.