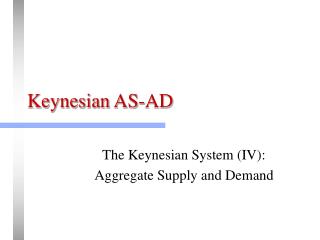 Keynesian AS-AD. The Keynesian System (IV): Aggregate Supply and Demand. Constructing AD. The AD curve can be constructed from the IS-LM apparatus. Recall that the price level is established outside the IS-LM model.

The AS-AD Model - . determination of output in the short-run and medium-run requires equilibrium in the goods, financial,

AD and AS - . aggregate demand (ad): the quantity of real gdp demanded (total quantity of g&amp;s that all buyers in

The Fixed-Price Keynesian Model : An Economy Below Full – Employment Focus on the Demand Side - . aggregate