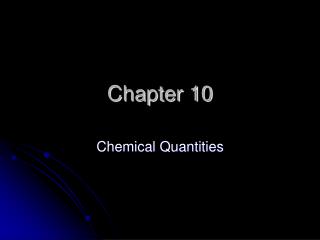 Chapter 10. Chemical Quantities. Chapter 10 Section 1. The Mole. Measuring matter. We measure by three different methods Counting- How many there are. Volume- How much space they take up. Mass- How much they weigh. We have to know conversion factors to relate these different measurements.